Out of the Blue

A harrowing drama from the director of Easy Rider 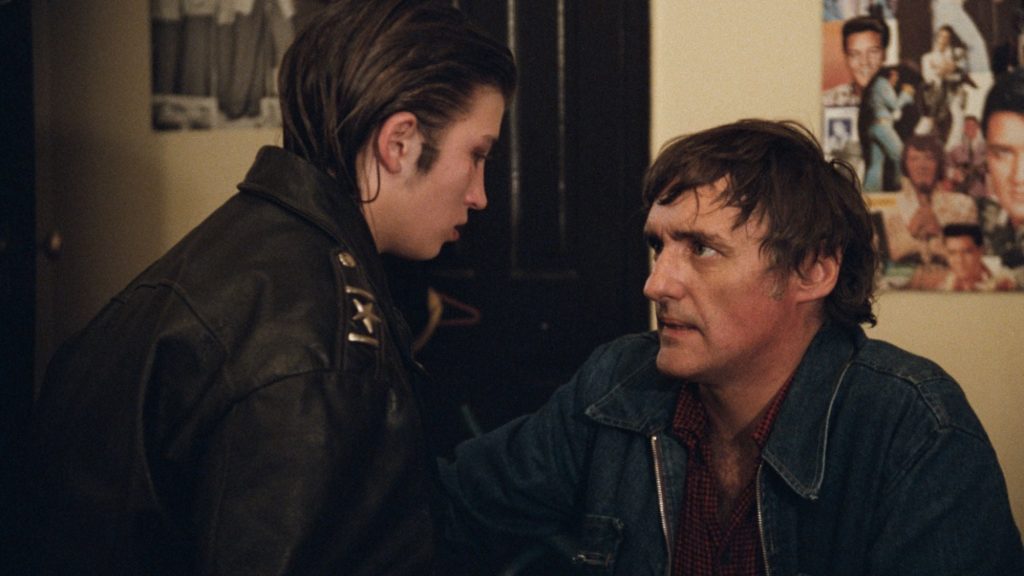 Dennis Hopper directed and stars in OUT OF THE BLUE – the spiritual sequel to his own EASY RIDER, chronicling the collapse of sixties idealism into the nihilistic haze of the 1980s.

Don Barnes (Hopper) is a truck driver in prison for drunkenly smashing his rig into a school bus. Linda Manz (DAYS OF HEAVEN) plays CeBe, his daughter, a young teen rebel and outsider obsessed with Elvis and the Sex Pistols. Her mother Kathy, (Sharon Farrell) waitresses, shoots up drugs and takes refuge in the arms of other men, including her husband’s best friend, Charlie (Don Gordon). CeBe runs away to Vancouver’s punk scene and ends up on juvenile probation under the care of well-meaning psychiatrist Dr. Brean (Raymond Burr). After Don’s release, the family struggles to re-connect and start over before the revelation of dark secrets leads to a harrowing conclusion.

Director’s Statement: “I was hired as an actor for ‘Out of the Blue.”  Two weeks in, I took over as director with full autonomy – because the 2 ½ hours of film in the can was unusable. I rewrote the entire screenplay over the weekend and started shooting on Monday. In many ways, it’s maybe my best film. It’s about the society of North America; the family unit falling apart. I’m a social protest painter, I can’t help it. I don’t know much about the past, I’m not really interested in the future, or in space. I like to make things about what I see. For a person like me, it’s a miracle that I get the opportunity to direct a film. Because I don’t listen to anybody. I don’t have any collaborators except my actors. (Dennis Hopper; from interviews)

“Thumbs up! A bitter unforgettable poem about alienation. One of the unsung treasures among recent independent films.” (Roger Ebert)

“A sharp shock to complacent faith in civilization” (Daily Telegraph)

*Minors welcome. Must be 19+ w/ID for bar service.
*Rio Theatre Groupons and passes OK for any single film screening only. Please redeem at the box office.
*If you are looking to redeem your tickets to either a canceled Rio Theatre screening or a Rio Theatre gift certificate, please email <[email protected]> with info including your name, canceled receipt number, gift certificate info, what you are wanting to see and when, and we can make the switch for you in advance. Alternately, you can bring this information with you to the venue, and we will do our best to help you at the box office.

In accordance with the Province of British Columbia’s current PHO from the Ministry of Health, all eligible patrons must present their proof of vaccine status for entry. Masks are to be worn by all patrons, except when seated. No exceptions.

OUT OF THE BLUE (Dennis Hopper, 1980 / 94 mins / 18A) A young girl whose father is an ex-convict and whose mother is a junkie finds it difficult to conform and tries to find comfort in a quirky combination of Elvis and Vancouver’s punk scene.

A young girl whose father is an ex-convict and whose mother is a junkie finds it difficult to conform and tries to find comfort in a quirky combination of Elvis and the punk scene.