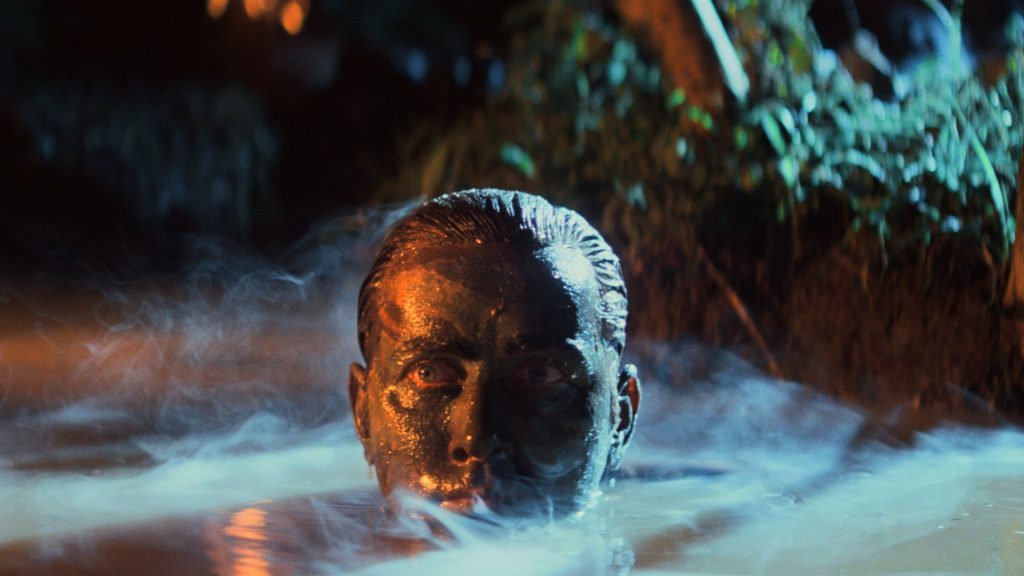 It is the height of the war in Vietnam, and U.S. Army Captain Willard is sent by Colonel Lucas and a General to carry out a mission that, officially, ‘does not exist – nor will it ever exist’. The mission: To seek out a mysterious Green Beret Colonel, Walter Kurtz, whose army has crossed the border into Cambodia and is conducting hit-and-run missions against the Viet Cong and NVA. The army believes Kurtz has gone completely insane and Willard’s job is to eliminate him. Willard, sent up the Nung River on a U.S. Navy patrol boat, discovers that his target is one of the most decorated officers in the U.S. Army. His crew meets up with surfer-type Lt-Colonel Kilgore, head of a U.S Army helicopter cavalry group which eliminates a Viet Cong outpost to provide an entry point into the Nung River. After some hair-raising encounters, in which some of his crew are killed, Willard, Lance and Chef reach Colonel Kurtz’s outpost, beyond the Do Lung Bridge. Now, after becoming prisoners of Kurtz, will Willard & the others be able to fulfill their mission?

“One of the greatest of all films.” (Roger Ebert)

“‘Apocalypse Now’ is not merely the greatest film to come out of the Vietnam experience, but one of the great works about the madness of our times.” (The Guardian)

*Minors permitted. Must be 19+ w/ID for bar service. Rio Theatre Groupons and passes OK for any single film screening only. Please redeem at the box office.
*Advance ticket sales end an hour before showtime; unless otherwise noted tickets are available for purchase at the door.
*If you are looking to redeem your tickets to either a canceled Rio Theatre screening or a Rio Theatre gift certificate, please email <[email protected]> with info including your name, canceled receipt number, gift certificate info, what you are wanting to see and when, and we can make the switch for you in advance. Alternately, you can bring this information with you to the venue, and we will do our best to help you at the box office.

At the height of the Vietnam war, Captain Benjamin Willard is sent on a dangerous mission that, officially, "does not exist, nor will it ever exist." His goal is to locate - and eliminate - a mysterious Green Beret Colonel named Walter Kurtz, who has been leading his personal army on illegal guerrilla missions into enemy territory.