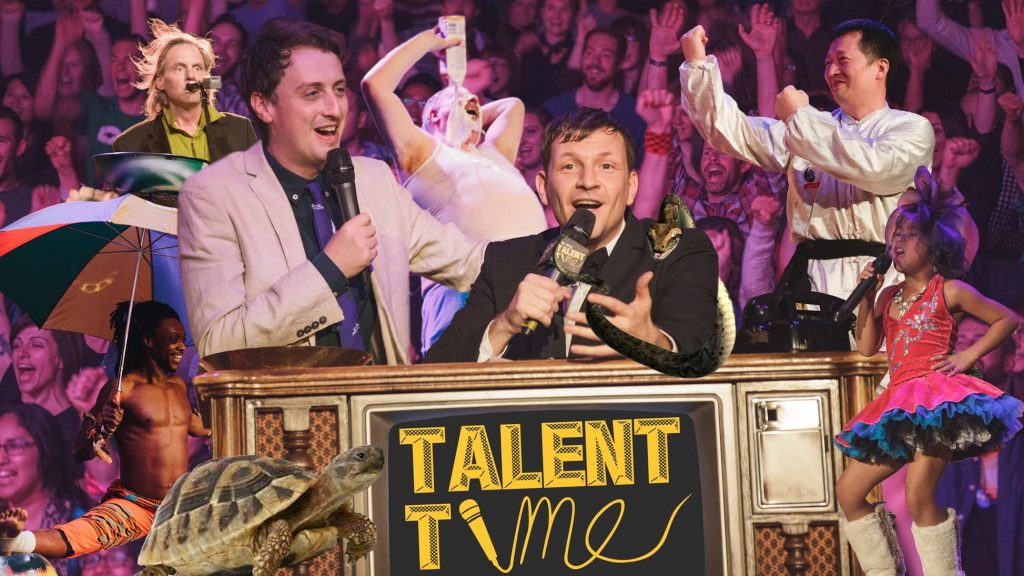 Paul Anthony’s Talent Time presents another original high concept game show! Welcome to “Donair Den,” where local entrepreneurs pitch their inventions in the hopes of shaving off a tender morsel of broiled beef, for their burgeoning business.

Featuring pitches from comedians like Graham Clark who is often sited as one of the best comics in the country. Graham is a 3-time Canadian Comedy Award winner and co-host of Maximum Fun’s Stop Podcasting Yourself. He’s a regular on CBC’s The Debaters and has appeared at Just for Laughs, Halifax Comedy Festival, Winnipeg Comedy Festival, Bumbershoot, Edinburgh Fringe festival. He is a winner of the Yuk Yuks Great Canadian Laugh Off and has appeared on HBO’s Funny As Hell.With co-host Ryan Beil from Sunday Service Improv. Pitches will also be heard from the audience and real amateur inventors like James Ming Kwok and Ace Martens. With a house band led by Kristy-Lee Audette from the band Rong! Featuring entertainment from You Big Idiot, a band that performs real fast, fun and dumb skate punk (and have a song about donairs).

The angel investors include:

“Talent Time is the most innovative, raucus, totally silly and inspired show I have seen in years. Watching it is like freebasing sheer fun!” (Matthew Hays, Globe & Mail/CBC Arts Online)

“A cult phenomenon that’s been flying under the radar…Talent Time defies genre. You have to experience it to truly appreciate it.” (Guy MacPherson, The Georgia Straight)

In accordance with the Province of British Columbia’s current PHO from the Ministry of Health, all eligible patrons must present their proof of vaccine status for entry. Masks must be worn by all patrons at all times (except when seated). No exceptions.